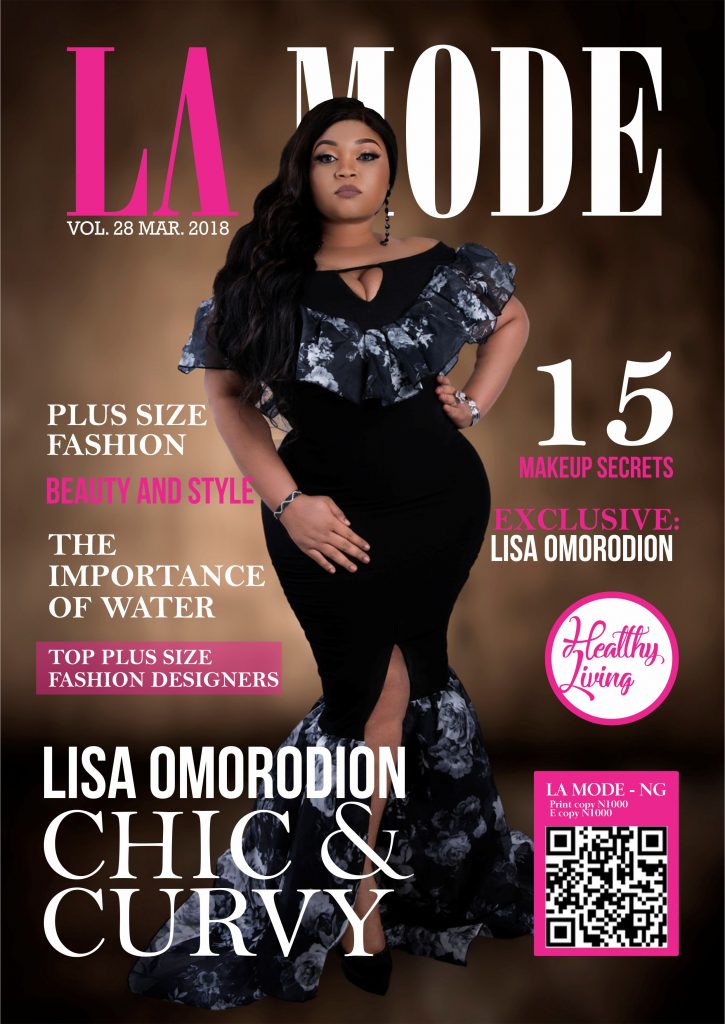 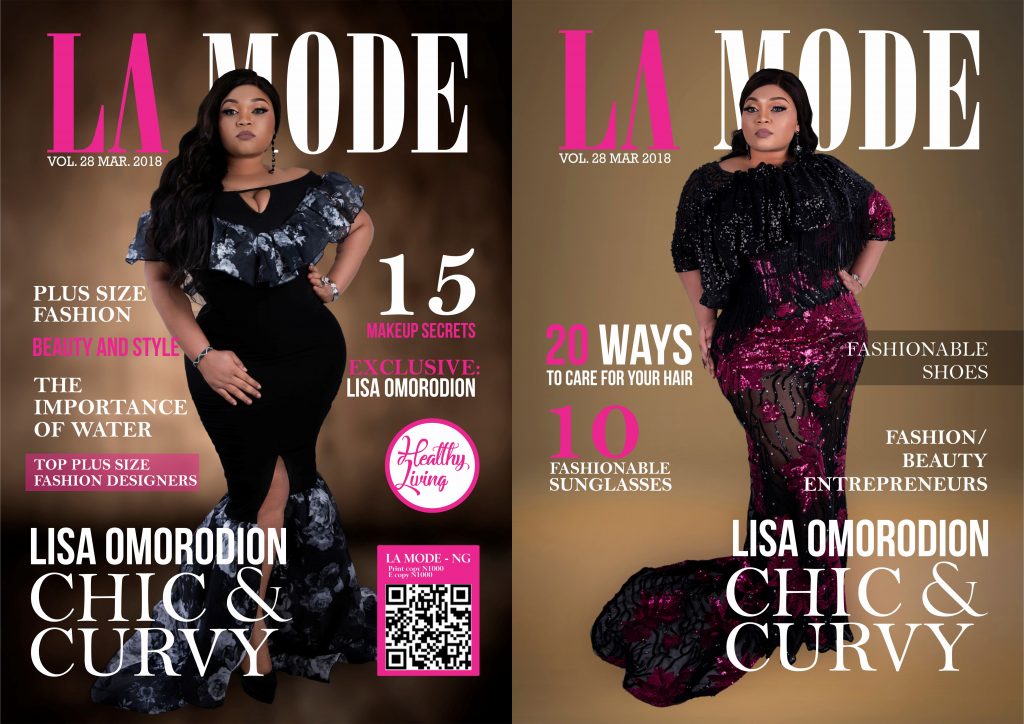 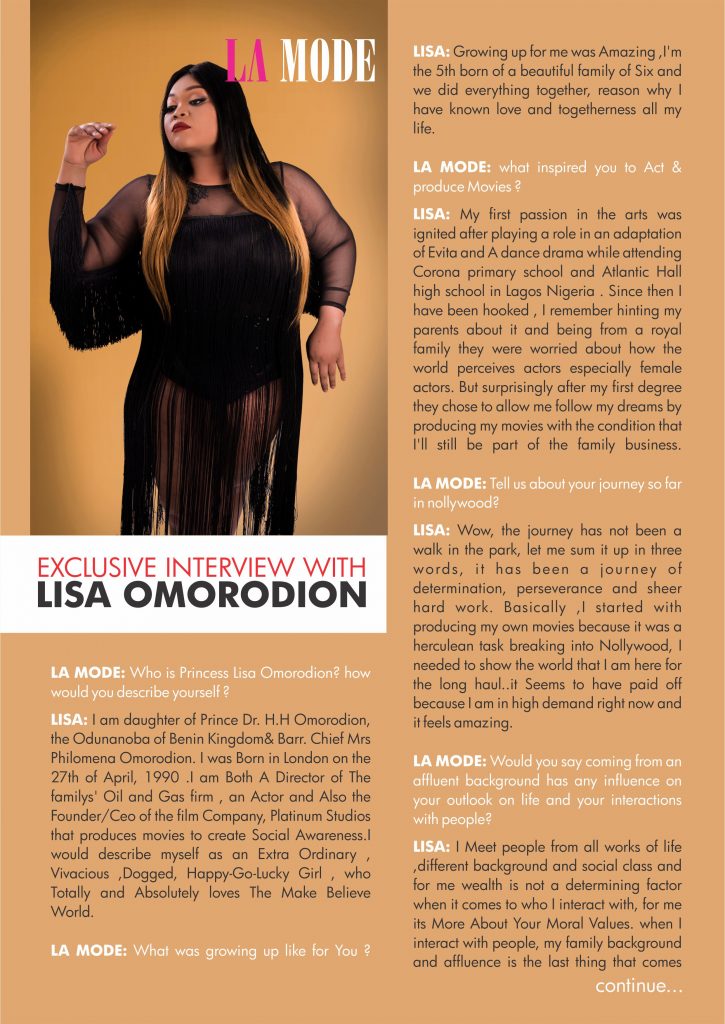 La Mode: Who is Princess Lisa Omorodion?how would       you describe yourself ?

Lisa: I am daughter of Prince Dr. H.H Omorodion, the Odunanoba of Benin Kingdom& Barr. Chief Mrs Philomena Omorodion. I was Born in London on the 27th of April, 1990 .I am Both A Director of The familys’ Oil and Gas firm , an Actor and Also the Founder/Ceo of the film Company, Platinum Studios that produces movies to create Social Awareness.
I would describe myself as an ExtraOrdinary , Vivacious ,Dogged, Happy-Go-Lucky Girl , who Totally and Absolutely loves The Make Believe World .

La Mode : what was growing up like for You ?

Lisa : Growing up for me was Amazing ,I’m the 5th born of a beautiful family of Six and we did everything together, reason why I have known love and togetherness all my life.

La Mode: what inspired you to Act & produce Movies ?

Lisa : My first passion in the arts was ignited after playing a role in an adaptation of Evita and A dance drama while attending Corona primary school and Atlantic Hall high school in Lagos Nigeria . Since then I have been hooked , I remember hinting my parents about it and being from a royal family they were worried about how the world perceives actors especially female actors. But surprisingly after my first degree they chose to allow me follow my dreams by producing my movies with the condition that I’ll still be part of the family business .

La Mode : Tell us about your journey so far in nollywood?

Lisa : Wow, the journey has not been a walk in the park, let me sum it up in three words, it has been a journey of determination, perseverance and sheer hard work. Basically ,I started with producing my own movies because it was a herculean task breaking into Nollywood, I needed to show the world that I am here for the long haul..it Seems to have paid off because I am in high demand right now and it feels amazing.

La Mode : Would you say coming from an affluent background has any influence on your outlook on life and your interactions with people?

Lisa : I Meet people from all works of life ,different background and social class and for me wealth is not a determining factor when it comes to who I interact with, for me its More About Your Moral Values. when I interact with people, my family background and affluence is the last thing that comes into play .

La Mode : Some people believe, you have gotten ahead in your career because of your background, do you concur?

Lisa : I am exasperated ! I detest when people attribute my family wealth/background to my achievements In Nollywood and this always comes up any time my name is mentioned . YES I am blessed with a supportive family, YES my background has aided me to a certain level but I have worked hard, I have toiled and I’m paying my dues . If it was all about money I would be at the peak of my career, but I am growing, learning and I’m work In progress.

La Mode: What do you think about the society and it’s demands to look a certain way, either thinner,light skinned or just picture prefect?

Lisa : I believe that Physical beauty is superficial and is not as important as a person’s intellectual, emotional, and spiritual qualities But SOCIETY BELIEVES OTHERWISE And I SAY BE YOURSELF NO matter What ,Those that love you will, regardless of your size ,complexion or height..

La Mode: Has being a plus-sized actress affected the kind of roles you get?

Lisa : Yes definitely because there are certain roles that are tailored for voluptuous ladies like me. It largely depends on the story, characters that will enable the casting director make a decision  e.g. you cannot cast a queen Latifah for a role meant for a Halle berry.  But there is always a role for Every Body size, completion or height especially if you are good at what you do . Case in point ; My Role in the series ,Skinny girl in Transit was meant for a Voluptuous Girl, there was no way a slim person could have been cast for that role .

La Mode : How does your family feel about what you do for a living?

Lisa : On 27 of February 2013 when I walked up to my family and informed them I wanted to be a thespian they were flabagasted and could not wrap their minds around why I would want to leave a thriving family business to the uncertain world of acting, after seeing how far I’ve come and how much  effort I put into it , They are now  Proud of me .

La Mode: What are your thoughts on the new generation of Nollywood actors?

Lisa : I think new Nollywood has big shoes to fill because old Nollywood has carved a niche for themselves, they have built a formidable industry, they made things easy for New Nollywood, but not withstanding New Nollywood is a Breath Of Fresh Air, We are hungry for Success, Passionate About Our Craft And We Are Rising Above Obstacles.

La Mode : Where do you see Your brand in 5 years?

La Mode : If you could go back in time, would you still be an actress and what would you change?

Lisa: Acting for me is not a phase, it is my passion, it’s my dream, I will do it Over and Over again. If I could Change Anything, It would be my choice of my first movie PROJECT. My first movie project gulped a lot of money AND I made a lot of wrong choices. With what I know now and the experiences I have garnered, I would have done things differently.

La Mode: What movie, role has been the most challenging playing?

Lisa : My most challenging role so far was one i played recently in a Movie called Excess Luggage ,I had to play an obsessed personal assistant and I had No speaking lines so it was harder because i had to act through my expressions and for me it has been my most interesting role so far, i cant wait for y’all to watch it !

La Mode : Who are your role models in the entertainment industry both locally and internationally?

Lisa : My role model would be the Ever beautiful Monalisa Chinda, with all her achievements she still remains Grounded, Humble and Amiable , She’s such an amazing person. Internationally I would say Meryl Streep, for her acting prowess, her dedication to her career and ability to remain relevant even with all the new faces in Hollywood.

La Mode : You debuted your film making career five years ago with the movie “first cut ” , what was the experience like and what challenges did you face ?

Lisa: First cut is a very emotional drama that focuses on the societal stigma and sequent psychological burdens that cloaks victims of rape which inevitably alters their perspective on life . The Experience that I had making such a movie with a strong message was amazing . My Joy was reaching out to millions of people going through similar situations to tell them they are not alone .
The challenges I faced were based on the fact that it was my first time making a movie , I got to understand that no matter the amount of money you invest in making a film , it takes the Grace of God , patience, a Good team to make a Good film .

Lisa: Oh of course it was , Schemers is another movie with a strong message ; Domestic violence ,The Inn is purely for Entertainment and Karma is Bae is a family Drama . I Enjoyed Every bit of making and Acting in this film .Special thanks to My Co- producer Mrs Grace Edwin Okon , Who taught Me a great deal of what I know today about Film making and the rest of my team for making it an effortless experience . Schemers is out in iroko tv , the inn And ‘Karma is bae’ are both out On My YouTube Chanel.

La Mode :  Before becoming the CEO of Platinum studios, you worked as a receptionist in your fathers business , worked as his personal assistant and now a director at your father’s Oil company, how was experience ?

Lisa : Learning The Nitty Gritty of the family business was very important to my parents ,They made me understand the value of serving before I could lead and why a good name is better than silver or Gold . I grew up with strong family values that has shaped me into the woman i am today .

La Mode : In an interview two years ago you were quoted as saying you break men’s heart, still breaking men’s heart? Or in a relationship?

Lisa: LOL Those were not my exact words ,the meaning of what I said was distorted and Misunderstood .About being in a relationship, at the moment I am Footloose and fancy-free.*Wink*

La Mode: What is your advice to youths who look up to you ?

Lisa: Your Dreams Are Valid No Matter How Big they seem ,Most Importantly Never ever Stop believing in Yourself ! 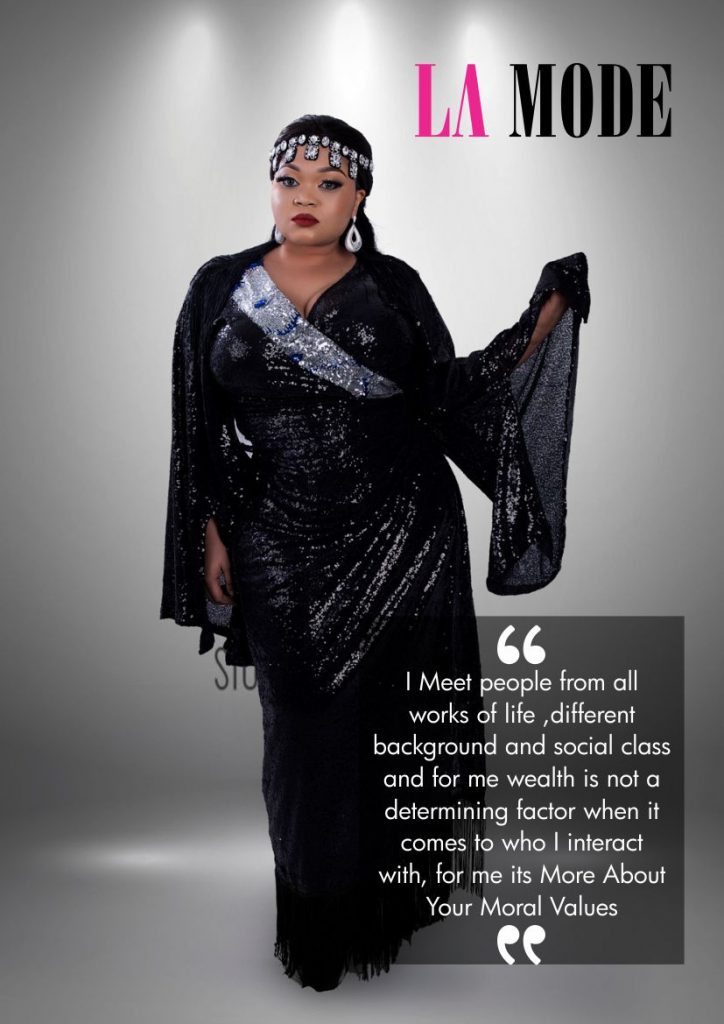 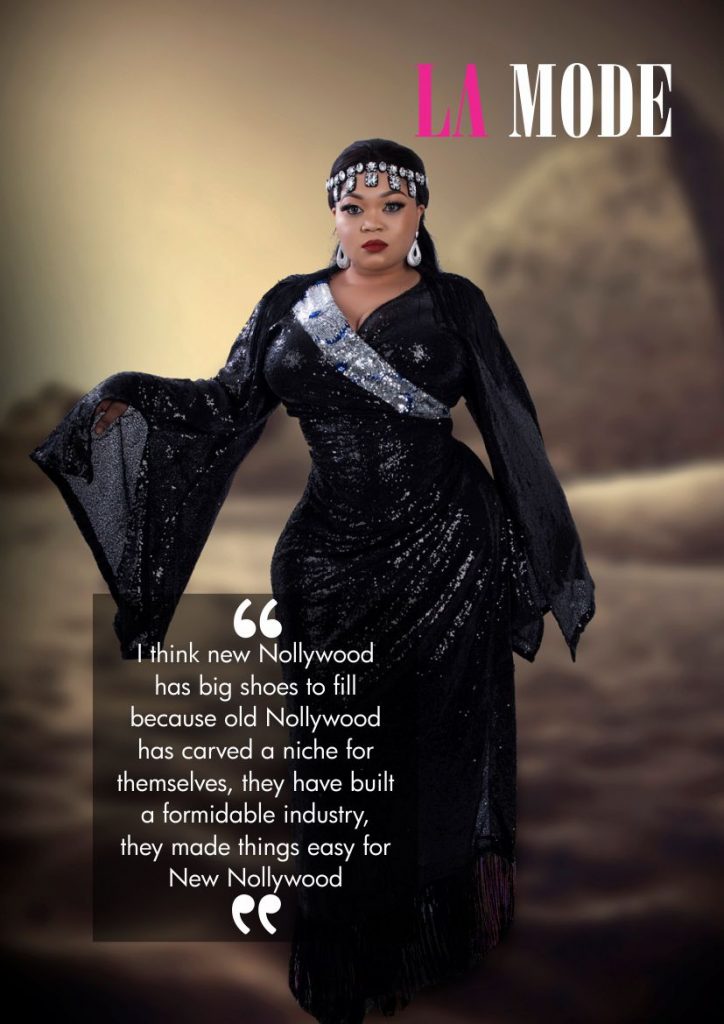 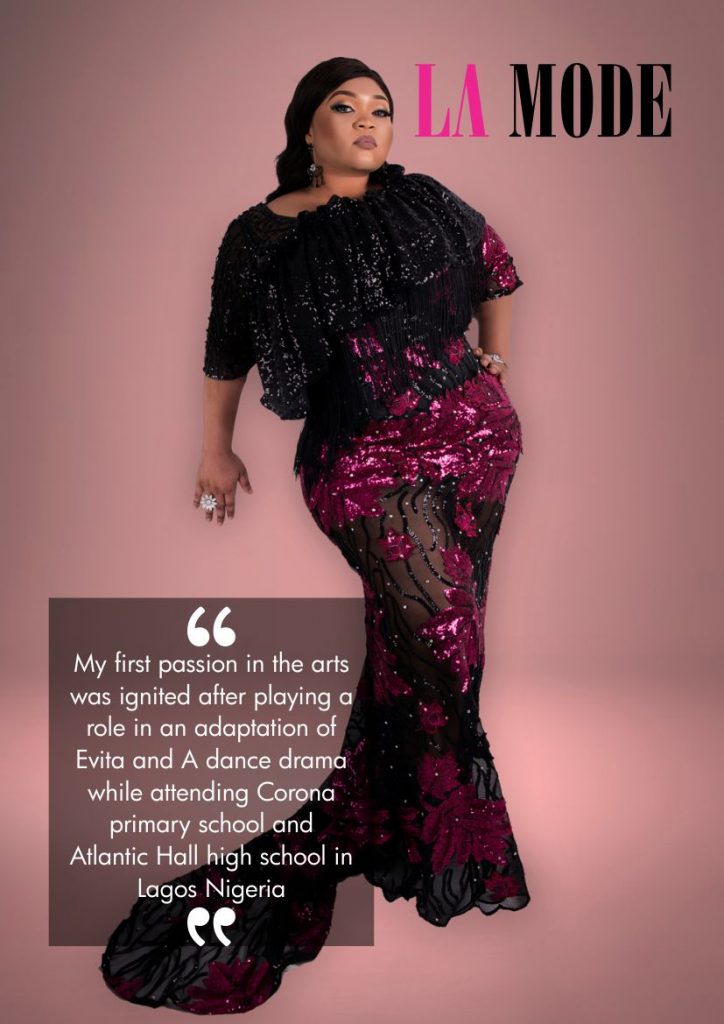 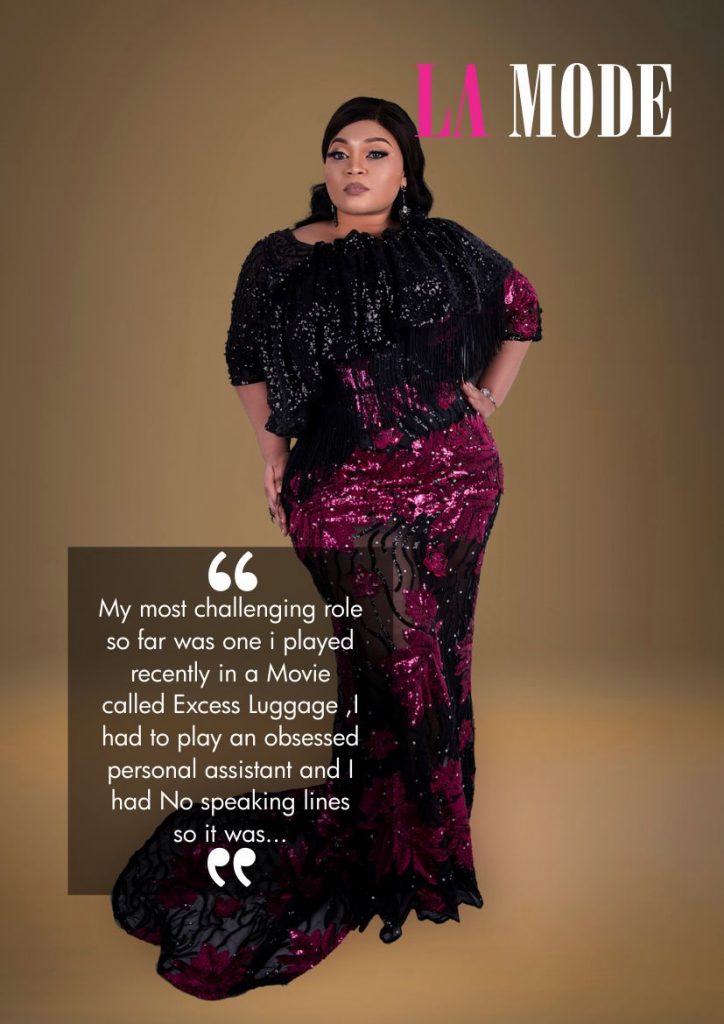 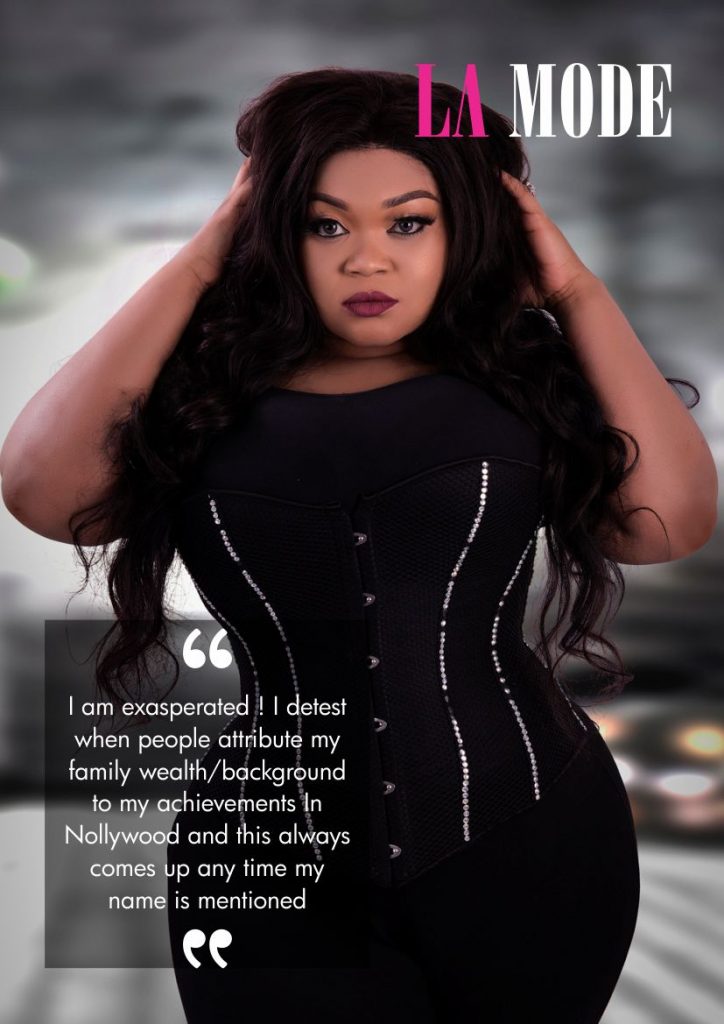 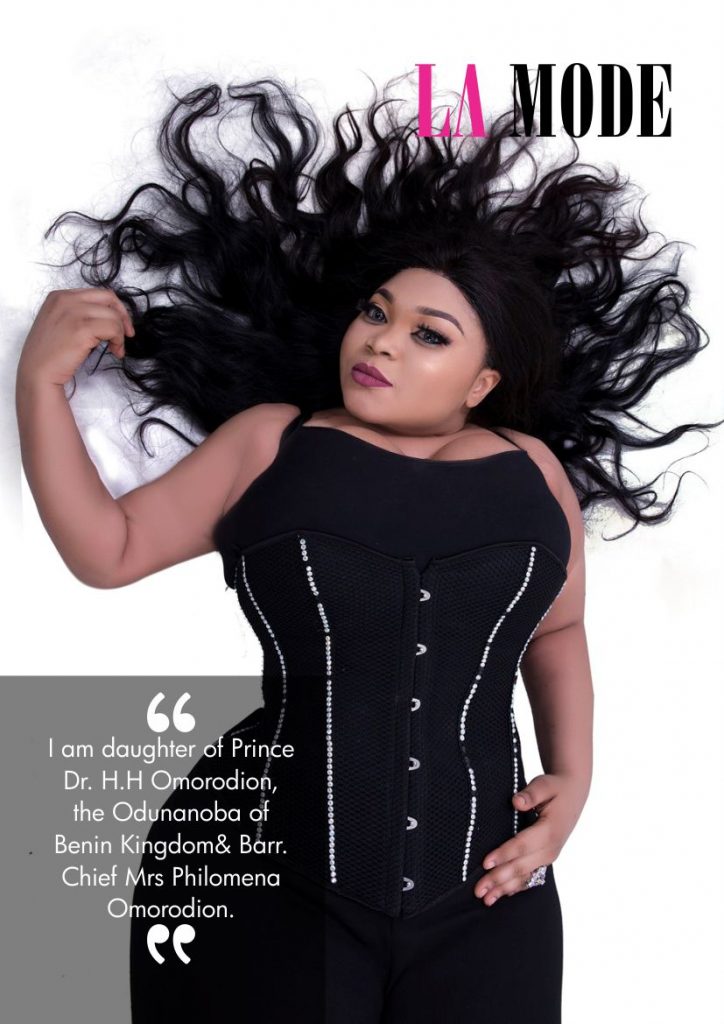 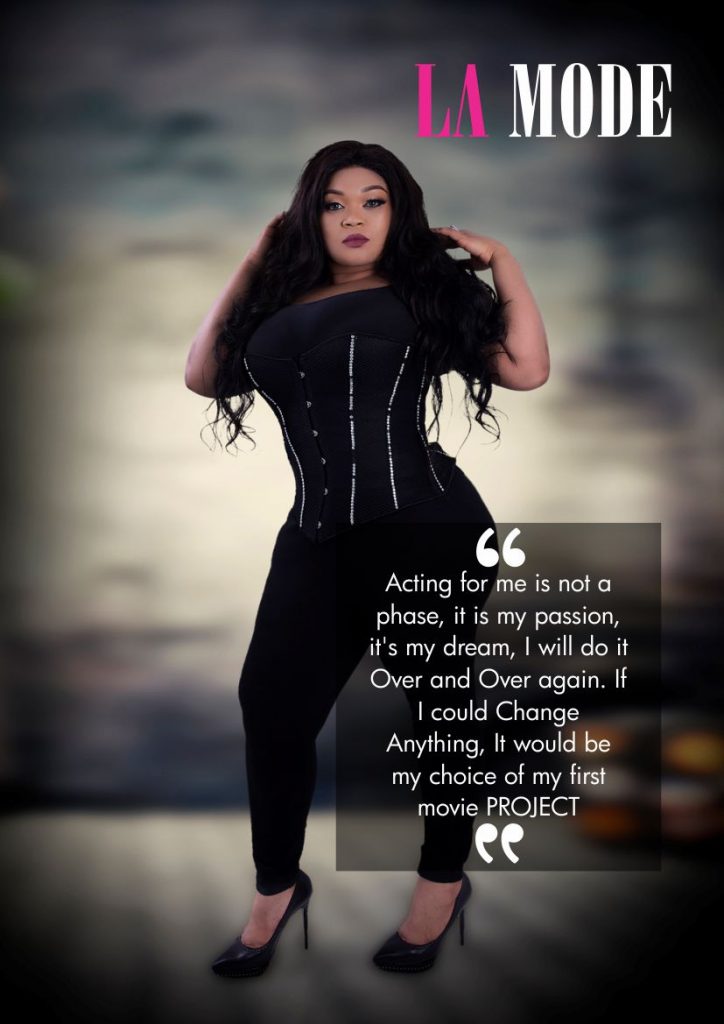 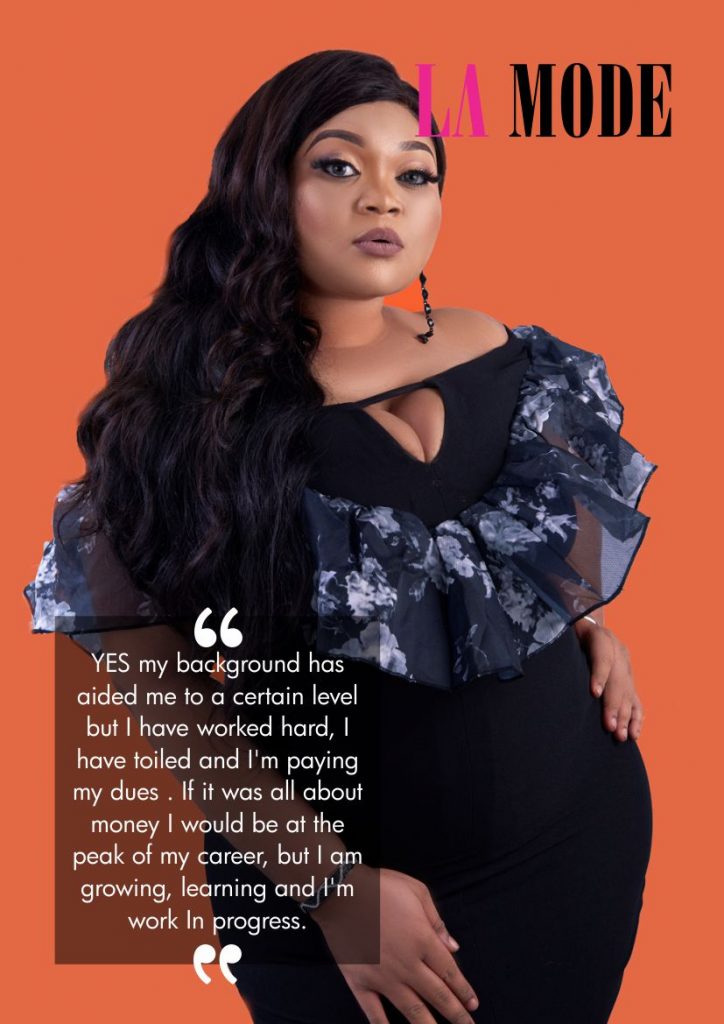 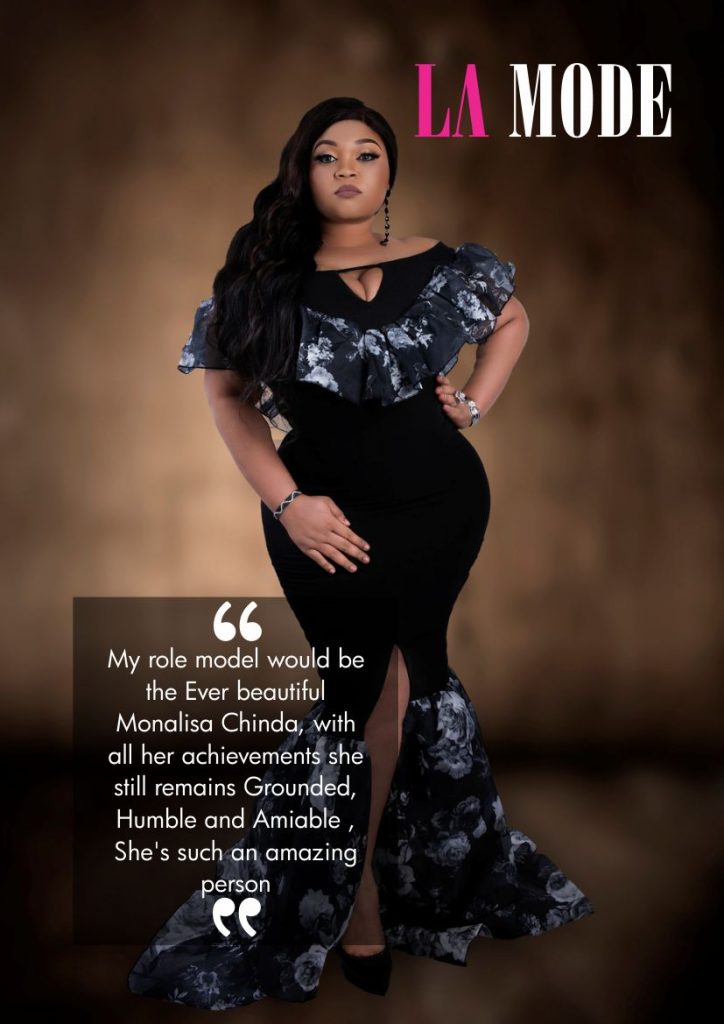 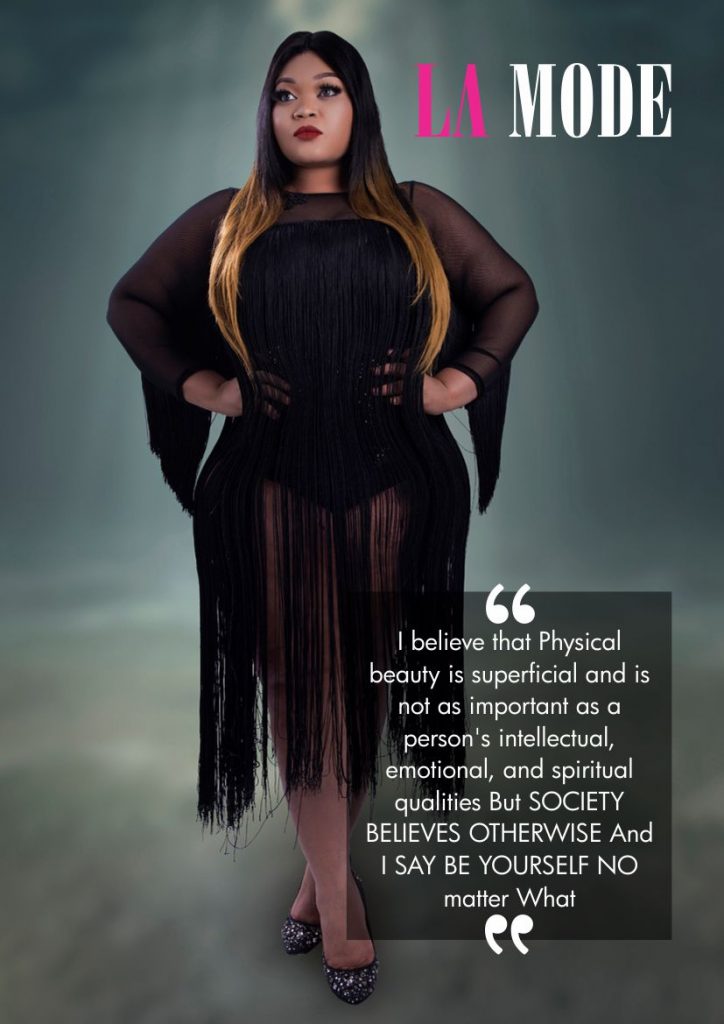