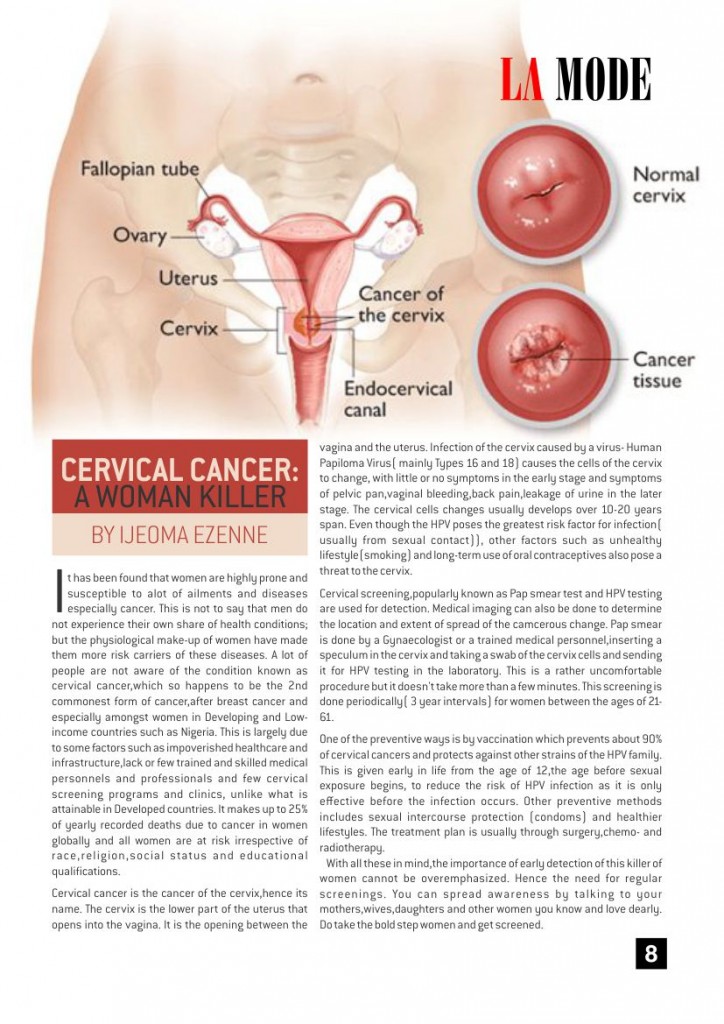 It has been found that women are highly prone and susceptible to alot of ailments and diseases especially cancer. This is not to say that men do not experience their own share of health conditions; but the physiological make-up of women have made them more risk carriers of these diseases. A lot of people are not aware of the condition known as cervical cancer,which so happens to be the 2nd commonest form of cancer,after breast cancer and especially amongst women in Developing and Low-income countries such as Nigeria. This is largely due to some factors such as impoverished healthcare and infrastructure,lack or few trained and skilled medical personnels and professionals and few cervical screening programs and clinics, unlike what is attainable in Developed countries. It makes up to 25% of yearly recorded deaths due to cancer in women globally and all women are at risk irrespective of race,religion,social status and educational qualifications.
Cervical cancer is the cancer of the cervix,hence its name. The cervix is the lower part of the uterus that opens into the vagina. It is the opening between the vagina and the uterus. Infection of the cervix caused by a virus- Human Papiloma Virus( mainly Types 16 and 18) causes the cells of the cervix to change, with little or no symptoms in the early stage and symptoms of pelvic pan,vaginal bleeding,back pain,leakage of urine in the later stage. The cervical cells changes usually develops over 10-20 years span. Even though the HPV poses the greatest risk factor for infection( usually from sexual contact)), other factors such as unhealthy lifestyle(smoking) and long-term use of oral contraceptives also pose a threat to the cervix.

Cervical screening,popularly known as Pap smear test and HPV testing are used for detection. Medical imaging can also be done to determine the location and extent of spread of the camcerous change. Pap smear is done by a Gynaecologist or a trained medical personnel,inserting a speculum in the cervix and taking a swab of the cervix cells and sending it for HPV testing in the laboratory. This is a rather uncomfortable procedure but it doesn’t take more than a few minutes. This screening is done periodically( 3 year intervals) for women between the ages of 21-61.

One of the preventive ways is by vaccination which prevents about 90% of cervical cancers and protects against other strains of the HPV family. This is given early in life from the age of 12,the age before sexual exposure begins, to reduce the risk of HPV infection as it is only effective before the infection occurs. Other preventive methods includes sexual intercourse protection (condoms) and healthier lifestyles. The treatment plan is usually through surgery,chemo- and radiotherapy.

With all these in mind,the importance of early detection of this killer of women cannot be overemphasized. Hence the need for regular screenings. You can spread awareness by talking to your mothers,wives,daughters and other women you know and love dearly. Do take the bold step women and get screened.