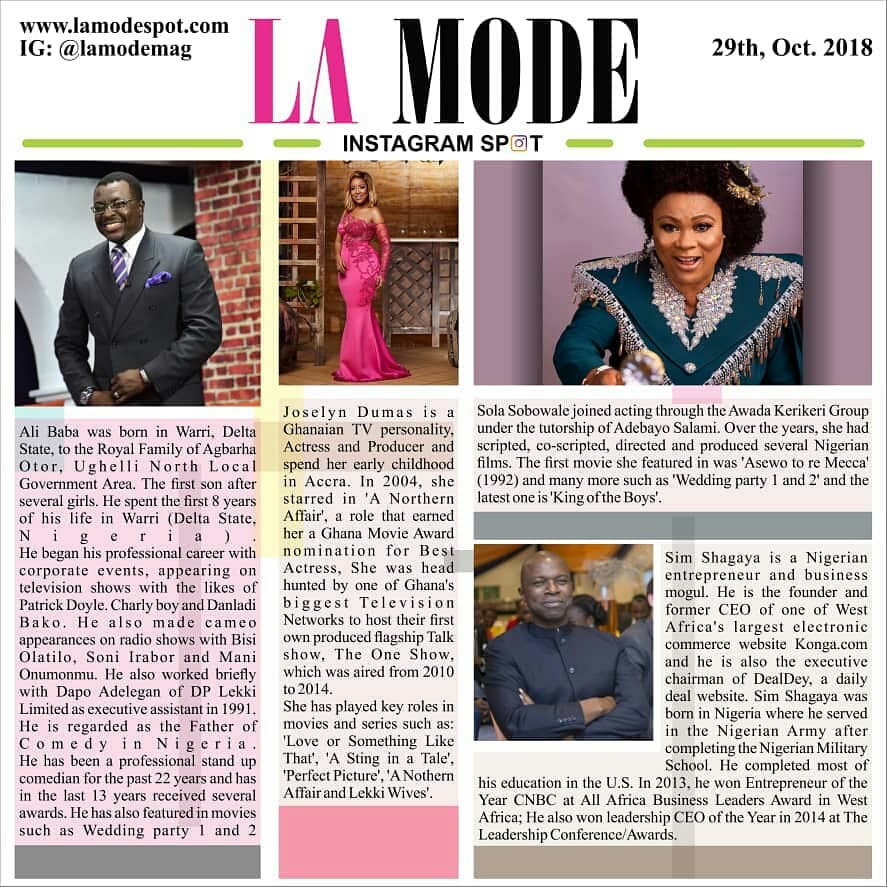 Sola Sobowale joined acting through the Awada Kerikeri Group under the tutorship of Adebayo Salami. Over the years, she had scripted, co-scripted, directed and produced several Nigerian films. The first movie she featured in was Asewo to re Mecca (1992) and many more such as Wedding party 1 and 2 and the latest one is King of the Boys

Joselyn Dumas is Ghanaian TV personality, Actress and Producer and spent her early childhood in Accra. In 2014 she starred in a A Northern Affair, a role that earned her a Ghana Movie Award and an Africa Movie Academy Award nomination for Best Actress, She was head hunted by one of Ghana’s biggest Television Networks to host their first own produced flagship Talk show, The One Show,which was aired from 2010 to 2014.

She has played key roles in movies and series such as Love or Something Like That, A Sting in a Tale, Perfect Picture, A Northern Affair and Lekki Wives.

Ali Baba was born in Warri, Delta State, to the Royal Family of Agbarha Otor, Ughelli North Local Government Area. The first son after several girls. He spent the first 8 years of his life in Warri (Delta State, Nigeria). He began his professional career with corporate events, appearing on television shows with the likes of Patrick Doyle, Charly Boy and Danladi Bako. He also made cameo appearances on radio shows with Bisi Olatilo, Sani Irabor and Mani Onumonmu. He also worked briefly with Dapo Adelegan of DP Lekki Limited as executive assistant in 1991. He his regarded as the Father of Comedy in Nigeria.

He has been a professional stand up comedian for the past 22 years and has in the last 13 years received several awards and he has featured in movies such as Wedding Party 1 and 2.

Sim Shagaya is a Nigerian entrepreneur and business mogul. He is the founder and former C.E.O of one of West Africa’s largest electronic commerce website Konga.com and he is also the executive chairman of DealDey, a daily deal website. Sim Shagaya was born in Nigeria where he served in the Nigerian Army after completing the Nigerian Military School. He completed most of his education in the U.S.